The entire business world is talking about digital transformation. IT leaders, on the other hand, talk about DevOps, cloud native, Kuberentes and containers. If you are still confused about how they all relate, this blog will help.

The cloud native stack with containers and Kubernetes at its core

The cloud native stack, also referred to as the new stack, is the new counterpart of cloud-hosted services and is an approach used to build and run applications.

These technologies simplify the setup, configuration and management of (Kubernetes) clusters in a more robust, production-like way while abstracting all the complexity away from the user. The term cloud native can be a little misleading. While developed for the cloud, they are not cloud-bound. In fact, we are increasingly seeing enterprises deploying these technologies on-premise.

Before we move on, let’s define each of the above-mentioned cloud native application characteristics:

Similar to virtual machines (VMs), containers isolate application components protecting them from crashing co-located processes. Unlike VMs, containers do not require a guest operating system, which means they are more lightweight. As a result, you can place a lot more containers on a single machine than VMs. Containers are also portable and can be moved between environments (for example, from on-prem to AWS or Azure or between all of them) providing users with a lot more flexibility.

Kubernetes is the de facto standard container orchestrator, adopted by all major cloud providers. If a legacy app with hundreds of VMs migrates to containerized microservices (see below), it may now be composed of thousands of containers. Managing each of these containers in a manual fashion is impossible. Which is where Kubernetes comes in. Kubernetes automates many of the cumbersome manual work, allowing you to scale your containerized applications. Kubernetes ensures the right number of containers are up and running and, if a deviation occurs, intervenes to fix it.

As container adoption has grown, microservices have started to proliferate. Microservices are applications that have been broken down into small components. Each micro-component is called a service — hence the term microservices.

There is quite a bit of buzz around microservices and there is a good reason for it. Not only can they increase the speed of innovation by allowing developers to push out updates or new features quickly (just look at the frequency your iPhone’s apps are updated), they also bring scaling to a new level. Unlike monolithic applications, which can only be scaled up by replicating the entire application in VMs or containers, microservice are replicated individually, consuming a lot fewer resources.

DevOps is a methodology enabled by cloud native technologies. It integrates development, IT operations, quality assurance (QA), and IT security. Well implemented, it translates into better code and reduced cost. DevOps provides teams with more autonomy and is proven to lead to more motivated teams.

Teams in DevOps-driven organizations are responsible for smaller application components from start to finish – from development through operations, hence DevOps. Traditionally, teams either develop, test or deploy larger components, passing them to the next team once they are done with their ”job”. This detaches them from the entire process and only incentivizes them to get the app or update to the next stage; not to be successfully deployed and used by customers. Such an approach has led to larger, less frequent and more error prone deployments. A DevOps approach, however, calls for frequent deployments, ideally daily (though a lower rate is more probable for traditional enterprises).

Containers and Kubernetes make microservices feasible allowing for the smaller more frequent deployments DevOps calls for. Realizing a DevOps approach also requires a huge cultural shift within the organization. In fact, experience has shown that it’s easier to adopt the new stack (and that’s quite challenging already) than changing the corporate culture to embrace this radically different way of doing things. 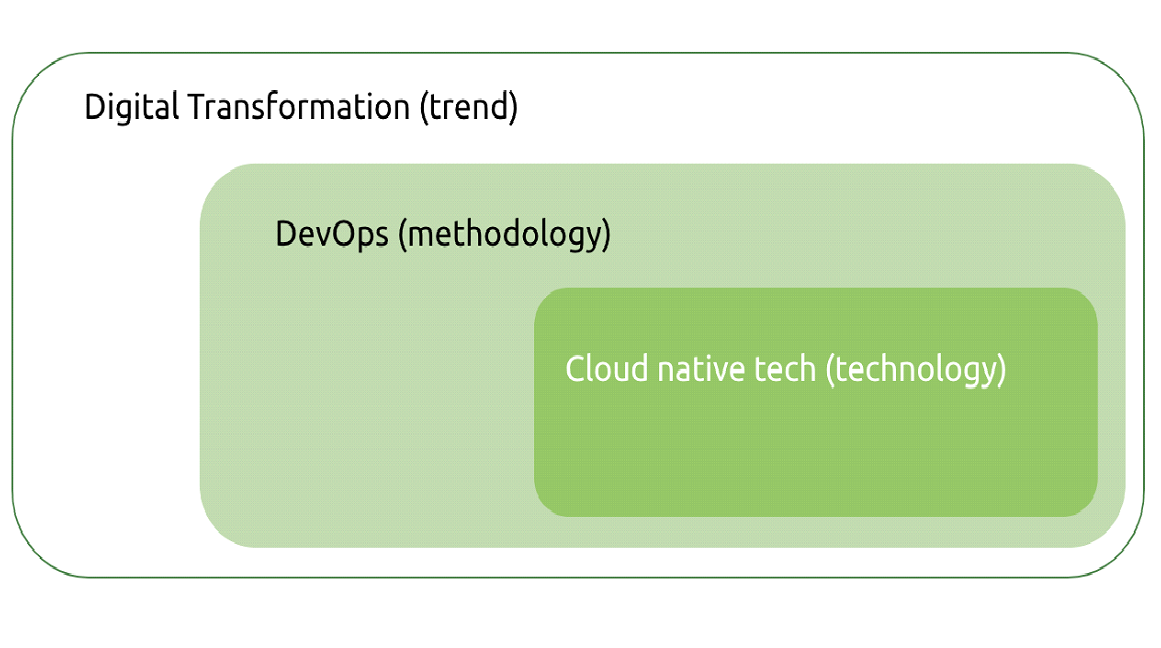 Digital transformation is the broader term that characterizes this entire trend. It refers to the process of moving an organization to an agile software-first approach to cope with the rapidly changing technology developments — imperative to staying competitive today. Digital transformation is enabled and made more efficient and agile by the new stack and a DevOps approach.

We hope this was helpful. In our next article, we'll discuss the current paradigm shift mainly driven by cloud native technologies. Stay tuned for more.