An edited version of this article was previously published by TechNative.

Modern computers are incredibly versatile, but even the most potent ones struggle with certain types of calculations and modeling. Now, imagine an entirely different kind of computer, with head-spinning power, using mind-bending quantum mechanics to bring barely believable capabilities to life. A supercomputer that can tackle calculations that the most powerful conventional machines would need decades to process – in a split second. This is a quantum computer.

Bright minds hatched the idea that quantum mechanics could be used for computation more than 40 years ago, but a production-ready quantum computer is still some years away. A few quantum machines do exist, and – like the one below – they resemble a baroque chandelier that could have hung at Versailles. 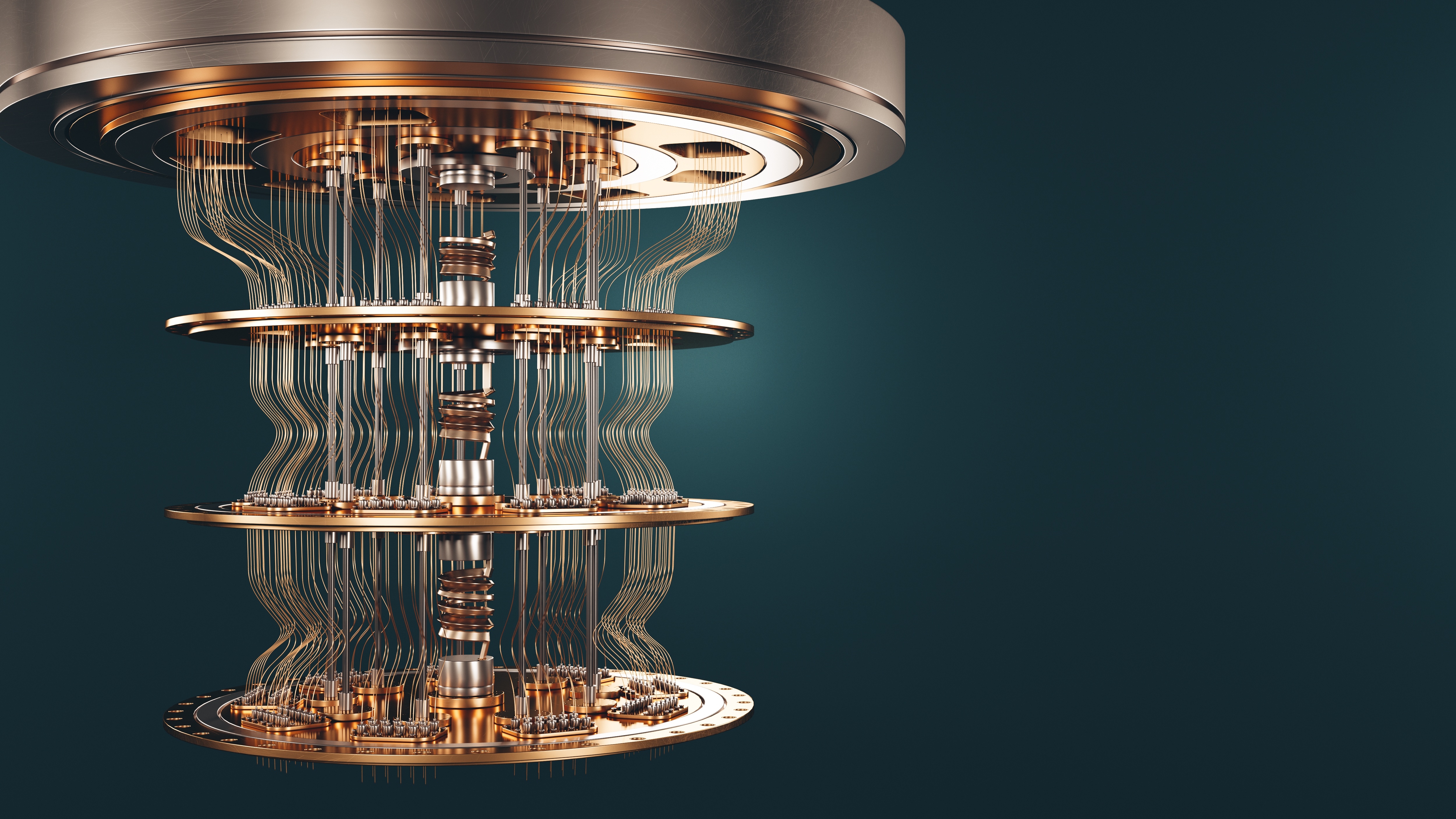 Quantum machines won’t replace today’s computers – don’t expect your next laptop to be a quantum device – but they will be able to tackle certain boxed and highly complex tasks that traditional computers cannot handle. If there are near-endless possible answers to a clearly defined problem, a quantum computer will find the solution much quicker than any conventional computer. Quantum computers are really good at finding the needle in the haystack, and they could soon make a real impact on everything from AI and ML, to chemistry, transportation, energy exploration, disaster prevention and recovery – even the military.

Before we delve into the use cases, a quick quantum computing primer. Conventional computers use binary bits – a combination of ones and zeroes – to represent and process information. The inside of a quantum computer contains “qubits” (i.e., “quantum bits”). When isolated from the external environment – and oscillating at extremely low temperatures – qubits can function as a computer’s processor and memory. In the subatomic world of quantum mechanics, qubits can reach a state of “superposition,” which – in simplified terms – means they exist in both 0 and 1 states simultaneously. Imagine flipping a coin. It’ll eventually land on either heads or tails. But if you spin it, you could say that – before it settles – it is both heads and tails at the same time – or, rather, there is a possibility that it can be either of the two. It is in superposition. In order to operate at scale, qubits need to be “entangled” – wired together in superposition.

“Quantum entanglement,” explains IBM,” allows qubits, which behave randomly, to be perfectly correlated with each other. Using quantum algorithms that exploit quantum entanglement, specific complex problems can be solved more efficiently than on classical computers.”

Alas, sheer qubit count is not the only obstacle. When something called “decoherence” forces a qubit out of superposition, it no longer possesses quantum properties. The solution is called “error correction,” and quantum computing pioneers like IBM, Microsoft and Google are hard at work making it happen so we can finally have quantum computing at scale. And then we can start writing software for the quantum stack.

For a more comprehensive explanation of quantum computing, check out this article. And don’t miss this irresistible video featuring IBM scientist Talia Gershon explaining quantum computers to five individuals – from an eight-year-old to a theoretical physicist from Yale.

Computer scientists and other sharp minds are still contemplating the best and most realistic uses for these strange machines. Possibilities include predictive analytics, which could help streamline and optimize large-scale transit operations and fleet maintenance, energy exploration and climate change modeling. Also on the radar: chemistry simulations of molecules and atoms. Because this complex behavior is driven by quantum mechanics, it is simply too hard to handle for conventional machines. You need quantum computing to simulate quantum-driven behavior.

Heavyweights are already considering taking the quantum leap: Volkswagen and other automakers are investigating quantum computing in search of improved battery chemistry for their electric vehicles. Microsoft, meanwhile, has theorized that quantum computers could help mitigate climate change. For military purposes, quantum computers could help with target acquisition, drone fleet ops and tactical and strategic modeling. They could also run advanced and dynamic modeling to help with emergency response and disaster recovery. Another area of interest for quantum computers: Energy exploration. In oil refining, massively big machines, called “hydrocrackers,” are used to “upgrade low-quality heavy gas oils … into high-quality, clean-burning jet fuel, diesel and gasoline.” Hydrocrackers are extremely complicated and costly to maintain; – the complexity of shutting them down for repairs, testing and restarting them may cause the machines to sit idle for as much as six months a year. EastBanc Technologies helped SAS Institute and its client Saudi Aramco build a predictive modeling application that enabled the operator to shave off months of downtime for these behemoths. The idea: Make all acute repairs when the machine is down and use technology to predict what might break next – and fix it preemptively. Adding quantum-driven AI as the “brain” for the hydrocracker could dramatically reduce downtime because the quantum computer could calculate exponentially more scenarios than current technology.

Just a few days ago, in another example of the immense potential of the technology, bright minds from the University of Glasgow’s School of Physics & Astronomy announced that they have adapted Grover’s algorithm to drastically cut down the time it takes to identify and analyze gravitational-wave signals.

One of the most tantalizing quantum computing use cases is artificial intelligence. Indeed, adding quantum power to AI could be what takes present-day “Narrow AI” to the next level – “General AI,” which we discussed in a previous article. The quantum-AI-fueled hydrocracker brain described above is a possible example of General AI. Quantum computing could also propel machines toward sentience within specific fields. Imagine computers perfectly empathizing and emulating emotions, with the ability to respond to complex signals, like expressions, eye movements and body language. It sounds outlandish, but a quantum AI might do a more than decent job sitting in for your therapist. Perhaps one day, quantum computing could drive us all the way to that barely fathomable third level of AI - “Super AI” – where machines outperform humans in every way.

EastBanc Technologies recently helped a client build a solution that uses AI and machine learning to predict the probability of winning or losing certain legal cases and deliver data-driven recommendations that will improve the chance of winning. This is already immensely useful, but if a future iteration of the AI ran on quantum fuel, the analysis could dig deeper, and the predictions become even more accurate as the system could process much more advanced models and explore every scenario of past and present cases.

Quantum computing has enormous potential, but we do need to cool the hype machine a tad. Today’s quantum machines are scientific marvels, but commercializing the technology, as the University of Maryland’s Sankar Das Sarma emphasizes, remains beyond our reach for now. But it is evolving. “By [2025],” IBM says, “We envision that developers across all levels of the quantum computing stack will rely upon our advanced hardware with a cloud-based API.” The hope is that “by 2030, companies and users are running billions, if not a trillion quantum circuits a day.” According to an article in Nature, the 126-qubit “Eagle Chip” is but a stepping stone towards Big Blue’s target of constructing a 433-qubit processor this year, followed by an 1121-qubit version – dubbed Condor – in 2023.

Quantum computing is fascinating, promising and just cool. Functional, stable, production-scale quantum machines could be up to a decade away. But once they materialize, we can start writing software for the quantum stack and begin to realize all these tantalizing quantum computing use cases. While we wait, curious minds can play around with a very real IBM quantum computer via cloud access.

Here at EastBanc Technologies, we say that “innovation only happens in production environments. The rest is just research.” We also know that when you innovate, something will go wrong. You cannot make an omelet without breaking an egg. You cannot innovate without taking risks. But that is okay as long as you learn from the mishaps. We are very much aware of the potential of quantum computing – and once these crazy machines reach production, we will be ready to innovate.